What’s going on with inflation?

Inflation has been a hot topic as consumers have recently been hit with the fastest price increases in decades. Investors are wondering about the investment implications, and they are right to do so, as inflation can have a major impact on markets and valuations.

This article is going to be all about inflation. Here’s a summary of the points we’ll hit:

Much more inflation talk can be found below. But first, a quick tangent into the current stock market mania.

Bubble update: bigger than 2000, by one measure

We recently happened upon a really interesting graph. Let’s look at the black line first: it measures the difference in expensiveness between the most expensive 30% of US stocks (by trailing P/E ratio) and the cheapest 30%. The higher the line, the more of a gap in valuation between the expensive stuff and the cheap stuff. 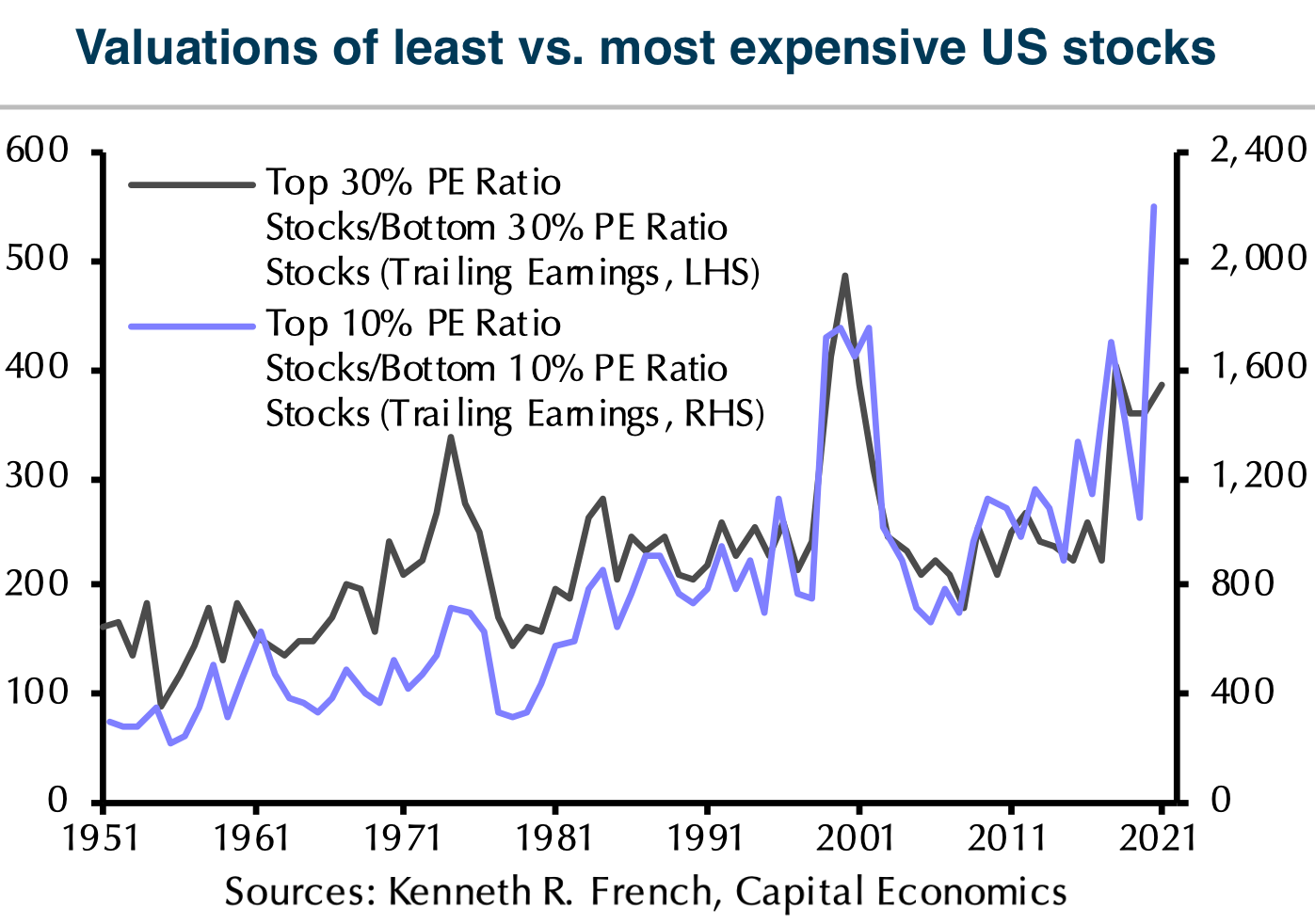 The results are not a huge surprise: the ratio is very high right now, exceeded only by the infamous dot-com bubble that peaked in 2000.

Now let’s look at the purple line. This measures the same ratio, but it focuses on the extremes by zooming in to the most expensive/cheapest 10% of stocks. By this metric, the valuation imbalance is at its biggest ever, and even higher than in 2000 by a comfortable margin.(1)

The inflation is real, at least for now

This graph shows that core inflation (excluding food and energy) recently hit 4.6% – the highest in over 20 years: 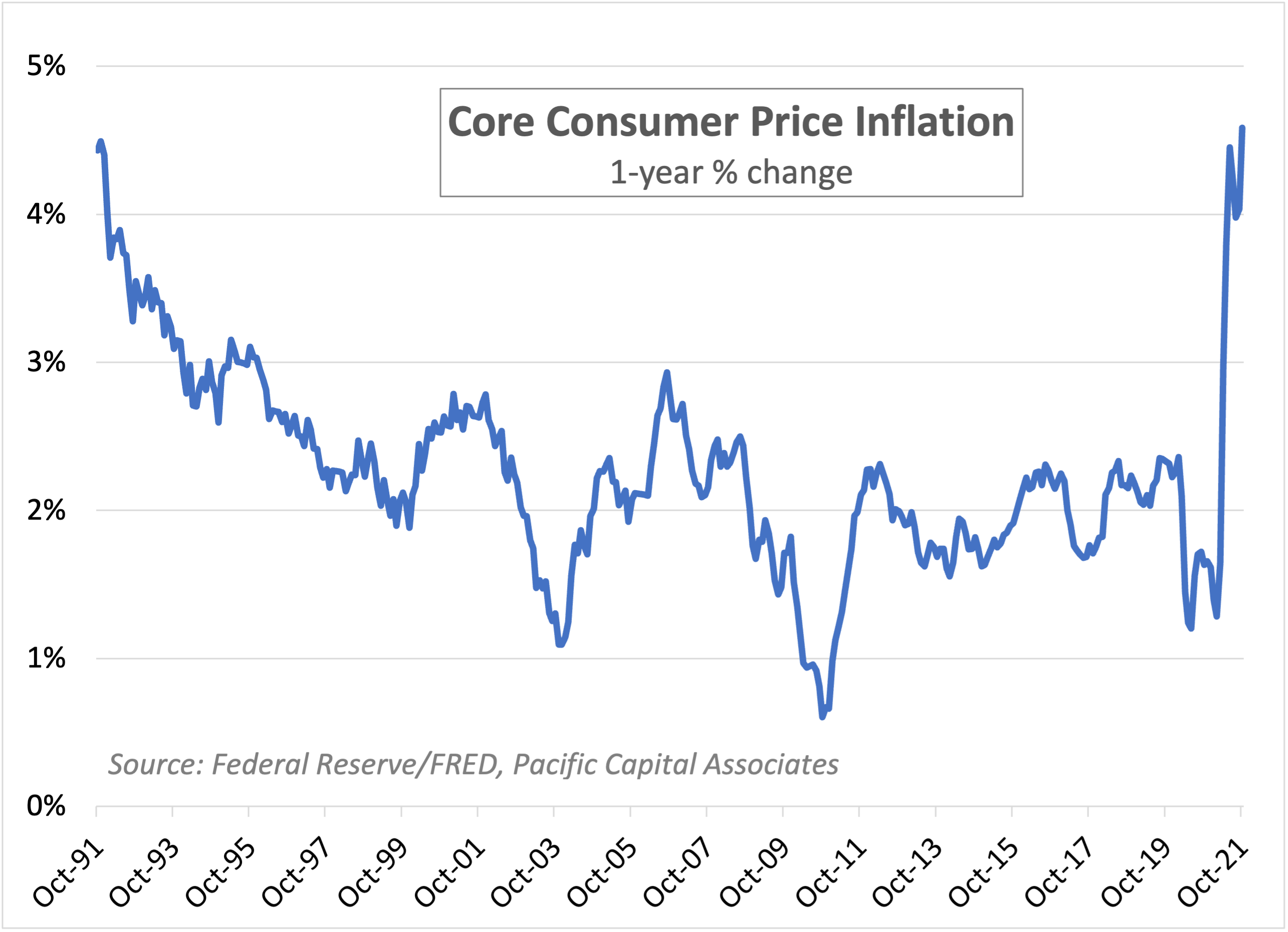 Inflation including food and energy was even higher at 6.2%, also the highest in over 20 years.(2) But excluding food and energy, as the Core CPI (Consumer Price Index) does, can help to filter out some noise and give a better idea of the underlying trend. It’s not to suggest that food and energy aren’t important… just that they bounce around so much that the picture becomes clearer if you exclude them.

Another way to tease out the main inflation trend is to order the items in the CPI basket by their price change, and to measure what happened in the middle of the pack. Here are a couple such indicators calculated by the Federal Reserve:

So, unusually high inflation is appearing across a variety of measures. We’ve heard it suggested that this could be due to “base effects” – that year-over-year inflation only appears high because it’s measured against prices that became artificially low after the pandemic. To test this idea, we’ve charted the 2-year change in core CPI, so that the most recent comparison “base” is in 2019 before the pandemic started. Again, prices are rising at their fastest pace since the early 1990s. Base effects are not the culprit here. 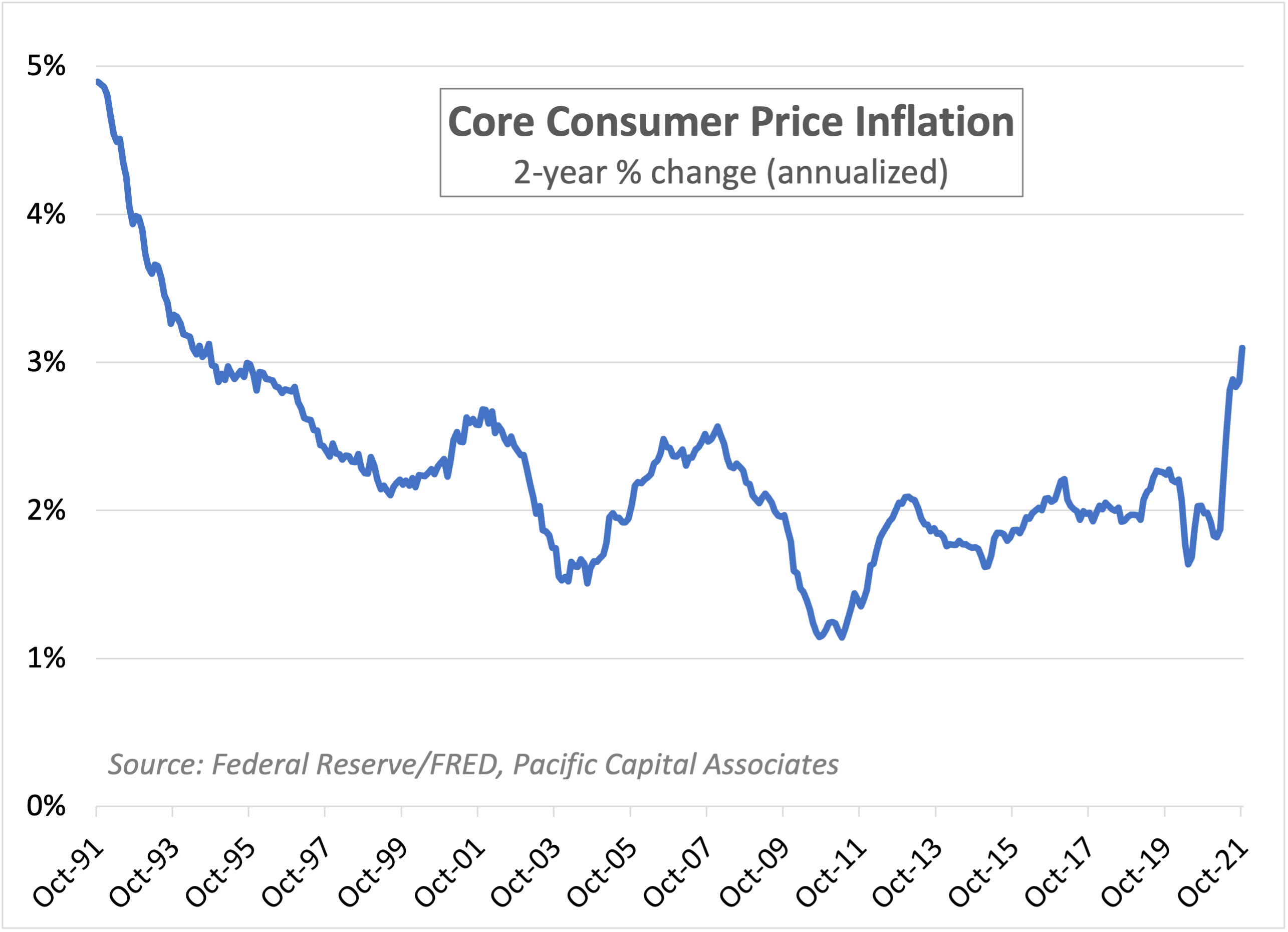 As elevated as some of these readings are, they are actually understating a key inflation component. For reasons we’ll relegate to a footnote, the dramatic rise in rents over the past year has only just begun to be factored into the CPI.(4) This is apparent from the graph below, which compares the shelter component of CPI with a more timely rent price index from Zillow. Shelter accounts for over 40% of core CPI, so when these price increases start to register, they could really move the needle on inflation measurements. 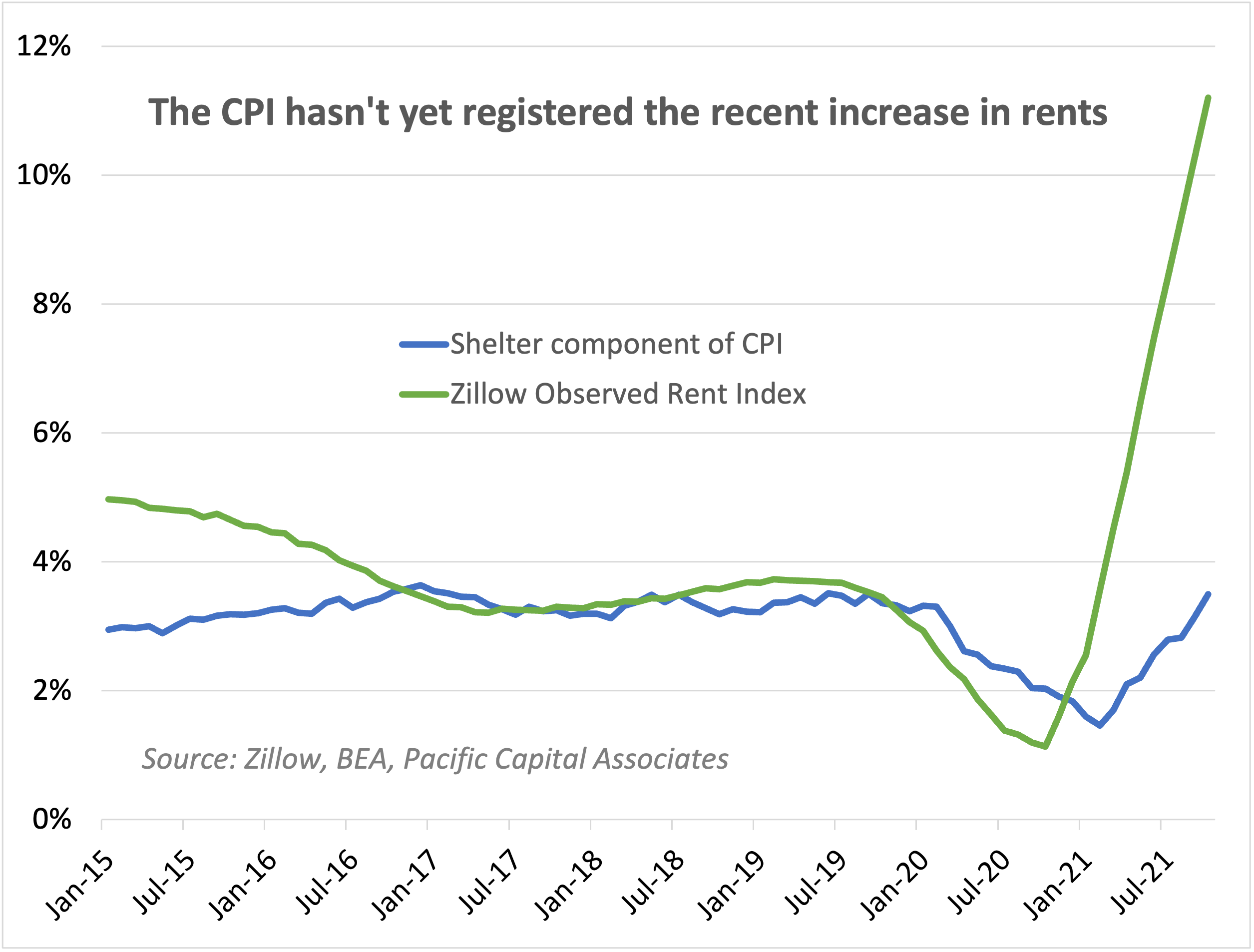 This brings us to the very controversial question of what happens next for inflation.

There are two broad schools of thought on where inflation goes next. We’ll try to very briefly sum them up here.

Team Transitory holds that the inflation surge is mostly due to temporary reopening pains such as supply chain bottlenecks, labor shortages, and a shift in demand from services to goods. These factors will all resolve themselves soon enough, and in the meantime, the forces that have kept inflation low in recent years remain in place. These include: flexible labor markets, limited labor bargaining power, disinflationary technological progress, wealth and income inequality, and anchored inflation expectations. Once the reopening issues are worked through, these secular disinflationary forces will return to the fore and push inflation down to its pre-pandemic norms.

Team Persistent holds that a huge amount of money has entered the system via Fed and government stimulus, and that (unlike the post-financial-crisis period) the money has gotten into the hands of people who will spend it in the real economy. All this new money will fuel increased demand for a while yet, and it’s going to take time for supply to catch up. The result in the meantime will be higher prices. Adding to the inflationary dynamic are rapid wage increases (which can feed back into inflation in a self-reinforcing way), rising inflation expectations, and the baked-in rise in shelter inflation discussed above.

There are more than just two views, of course, and we’ve simplified the debate to keep things short. Also, there is a lot of common ground between the two camps. Team Transitory acknowledges that inflation is currently elevated; they just believe it will revert to pre-pandemic norms soon enough. Team Persistent agrees that inflation will likely decline from these levels, but they disagree about how low it will go and how quickly it will get there.

We think both sides make some compelling arguments, and we really don’t know who will be proven right. But we don’t think anyone knows who will be right, because…

Nobody is good at predicting inflation

Inflation is a poorly understood phenomenon. The current surge is a case in point: it has come as a complete surprise to markets, professional forecasters, and the Fed.

These are some pretty significant misses. And it’s not just the most recent inflationary episode — the Fed itself has published research showing that forecasters and markets have often been unreliable in their inflation predictions.(7)

The point isn’t to disparage these groups, but to illustrate that predicting inflation is really hard. Even those with the most expertise and resources have a tough time of it.

Given this, we prefer to take any inflation prediction with a grain of salt and plenty of humility. In the next section we’ll discuss how this translates to our investment allocations.

The current bout of high inflation has not had much of an impact on interest rates. The concern is that it could, if inflation remains elevated. It’s been typical in the past for persistent higher inflation to lead to higher rates as investors demanded more interest to compensate for inflation, or central banks raised rates to cool things down.

Higher interest rates are a negative for stocks and bonds. If you own a bond that pays 3%, and market rates go up to 4%, you’re stuck with the lower rate and nobody will want to buy your 3% bond when they can go get 4% on the open market. That is, unless the price of your bond falls enough to make up for the lower yield. (The longer the term of the bond, the more the value will have to drop because that buyer will be stuck with the low rate for a longer period of time). And stocks “compete” with bonds for investors’ money. If bonds start offering a higher fixed rate, people will only take on the uncertainty of owning stocks if they are priced to deliver a correspondingly higher return. This is often accomplished by a decline in stock prices, which leads to lower stock valuations and higher expected future returns from that new level.

It seems to us that markets aren’t priced to allow for the possibility of higher rates. Bond yields are near historical lows and stock valuations (in the US anyway) have rarely been higher, which suggests that it will be tough to deliver good long-term returns from here even if rates do remain low. Adding higher rates into that mix would only make things worse. Team Transitory may prevail in the end, but if they don’t, it could prove very painful for investors in richly-valued US stocks and long-term bonds.

In our portfolios, we are trying to avoid being dependent on any specific outcome with regard to inflation or interest rates. We are also trying to mitigate the risk we’ve been discussing since earlier this year — the major speculative bubble we believe is taking place in US growth stocks. Here are some of the ways in which we’re approaching this unusual combination of valuation and interest rate risk:

Above all, we continue to focus on investments that are priced to deliver good likely long-term returns across multiple scenarios, including different interest rate environments. This is in stark contrast to the typical US stock and bond portfolio, which we feel is standing directly on the tracks should the rising-rate train roll in.

A lot of this probably sounds familiar, because we’ve discussed it before in the context of the growth stock bubble. The “margin of safety” provided by sticking to reasonably-priced investments can, over time, help to protect from a lot of different risks. This includes those risks that are known (such as inflation, rising rates, pandemics, and bubbles), and just as importantly, those that have yet to show themselves.

Previous Post: « What’s going on with housing?
Next Post: The beginning of the end of the bubble? »